Magnificent villas, picturesque waterfront promenades, and medieval city centers against the breathtakingly beautiful mountain panorama in the background: Lake Garda offers aesthetic pleasure to everyone. Sports enthusiasts get their money’s worth around Lake Garda. They can choose between wind or kite surfing, mountain biking, or paragliding. The area offers ideal conditions for outdoor sports enthusiasts. Holidaymakers can relax in the warm thermal baths in Simione, the healing powers that were already used by the Romans.

The town of Sirmione stretches along the southern shore, partly on a peninsula. The place has a particularly beautiful waterfront. Sirmione was already famous as a spa town in the Roman Empire due to its sulfurous thermal springs. The remains of the “Grotte di Catullo”, an old Roman villa that served as a sanatorium with a thermal bath, can still be found in the town today. They form the most important archaeological site in northern Italy. Thanks to its state-of-the-art spa facilities, Sirmione still has the most significant private thermal center in Italy.

The town of Desenzano on the southern shore of the lake is the largest town on Lake Garda, with around 28,000 inhabitants. The center of the town is the picturesque Piazza Malvezzi at the old port. That Piazza is an important landmark of Desenzano because it was for a long time one of the most important trade centers in Northern Italy. Chic shops, the large marina, and elegantly restored trading houses still testify to the prosperity of the city. In the meantime, the town has become a popular shopping place for locals and tourists.

The pretty town of Salo with 10,000 inhabitants is located in a sheltered bay in the southwest of the lake. The place has been very wealthy and has been designated the administrative center of the west bank several times. Chic fashion boutiques by Italian designers characterize the old town. Also, there are many good restaurants where you can enjoy first-class fish. A magnificent promenade invites you to stroll. Despite many tourist attractions, Salò has retained its authentic charm and is mainly visited by Italians.

The place in the north of Lake Garda is often referred to as the “capital” of the lake. With 13,000 inhabitants, Riva del Garda is the second largest town on the lake. For a long time, the city belonged to Austria, and only in 1919 was it ceded to Italy. Among other things, former fortifications that can be visited testify to the contested time. The city has been a popular health resort since the 19th century. The mild climate, many sights and the longest bathing beach on the lake have attracted many tourists since then. Numerous mountain bikers also come to Riva del Garda. Due to the location at the southern end of the Alps, various transalpine routes end here. There is also a mountain bike festival every year.

The municipality of Gargnano consists of a total of 13 small towns that were built up the mountain on the western shore of the lake. The main town Gargnano is right on the lake. The small village has retained a particularly authentic, Italian charm since the tourist boom has mostly passed the city. In the meantime, Gargnano has become a popular meeting place for younger people, mostly because of the numerous restaurants, bars, and quaint pubs in the center. Surfers also like to come there. Due to the sheltered location in the middle of the mountains, the place is ideal for beginner surfers. Thanks to its location between the mountains of the “Alto Garda Bresciano” National Park, Gargnano also has an enjoyable, mild, Mediterranean climate.

The picturesque town on the eastern shore of the lake is one of Lake Garda’s most popular travel destinations. Due to its location where the two main winds of the lake meet, Malcesine is also very popular with surfers and sailors. Old and narrow streets characterize the cityscape. In the town’s background, the city panorama is dominated by a mighty Scaliger castle, which lies on a rock and offers a beautiful view over the lake. From Malcesine, a cable car leads up to Monte Baldo. From there, many hikers and mountain bikers start their tours on the “downhill routes”. The place is also popular as a starting point for paragliders.

The picturesque town of Limone is located in the west of Lake Garda. Characteristic of the cityscape is the terrace-like construction of the houses, built on top of each other on the rock. The city center is full of winding, charming alleys decorated with flowers. Limone is considered one of the most beautiful and popular places on Lake Garda and is therefore extremely popular with tourists. The city is often a bit crowded, especially in summer. Nevertheless, there are also quieter alleys off the main streets. The nature above the city, which is characterized by olive trees and lemon gardens, offers space for relaxation.

The city has been considered a “pearl of the lake” since Roman times. It captivates with its winding old town center, magnificent palaces, and a beautiful waterfront that leads to Bardolino’s neighboring town. From there, you can admire a breathtaking sunset, for which Garda is famous. The nature around the city is lush and Mediterranean. There are a lot of beautiful cypresses, olive trees, and Orleans. The place is a popular tourist destination because it has the best beaches in Lake Garda.

The former fishing town is located in the center of a well-known wine region of the same name. The “red Bardolino” or the rosé “Chiaretto” wines from the region are very popular. There are many vineyards and olive groves around the city. The products can often be purchased there directly from the farmers. The city itself now exudes urban charm. Many boutiques, restaurants, bars and discotheques ensure a bustle that attracts many Italians from the surrounding towns. The waterfront is also particularly beautiful, where you can take great walks along the lake to the neighboring towns of Garda or Lazise.

Lazise belongs to Verona’s province and is only about 23 km southeast of the city of the same name. The medieval city center is surrounded by a well-preserved city wall, through which three large city gates lead to the car-free center. The cityscape is characterized by picturesque corners, such as Piazza Vittorio Emanuele and a small harbor. Outside of the town, there is also a magnificent Scaliger castle that can be visited. Lazise is one of the most popular travel destinations on the so-called Olive Riviera and is also a very popular family place. There are numerous campsites in the area as well as the two amusement parks “Gardaland” and “Canevaworld”.

Arco is about five kilometers north of Lake Garda. The historic place was the winter seat of the Austrian imperial court in the 19th century. Even today, splendid Art Nouveau villas testify to the stately times. The castle ruins of Arco Castle, perched on a rock above the town, are also impressive. Due to its location, surrounded by mountains and the proximity to the lake, Arco is a climatic health resort. The mild climate also favors the flourishing of many exotic plants and trees, so there are even impressive sequoias in the parks. Arco is also popular with athletes because numerous climbers and mountain bikers set off on their tours from here. The “Rock Master”, an international climbing competition, also takes place in September.

The former fishing village in the north of the lake has only around 900 inhabitants. Nevertheless, the place is known far beyond the national borders today because Torbole is one of Europe’s best surfing areas. Due to the location on Lake Garda’s northern shore, there are perfect and constant winds that are ideal for windsurfing. There are surf centers, and most hotels also have their own board rental. Many mountain bikers and climbers also like to come there. The many athletes create a particularly youthful atmosphere, which can also be felt in the numerous pubs and discos in the evening. 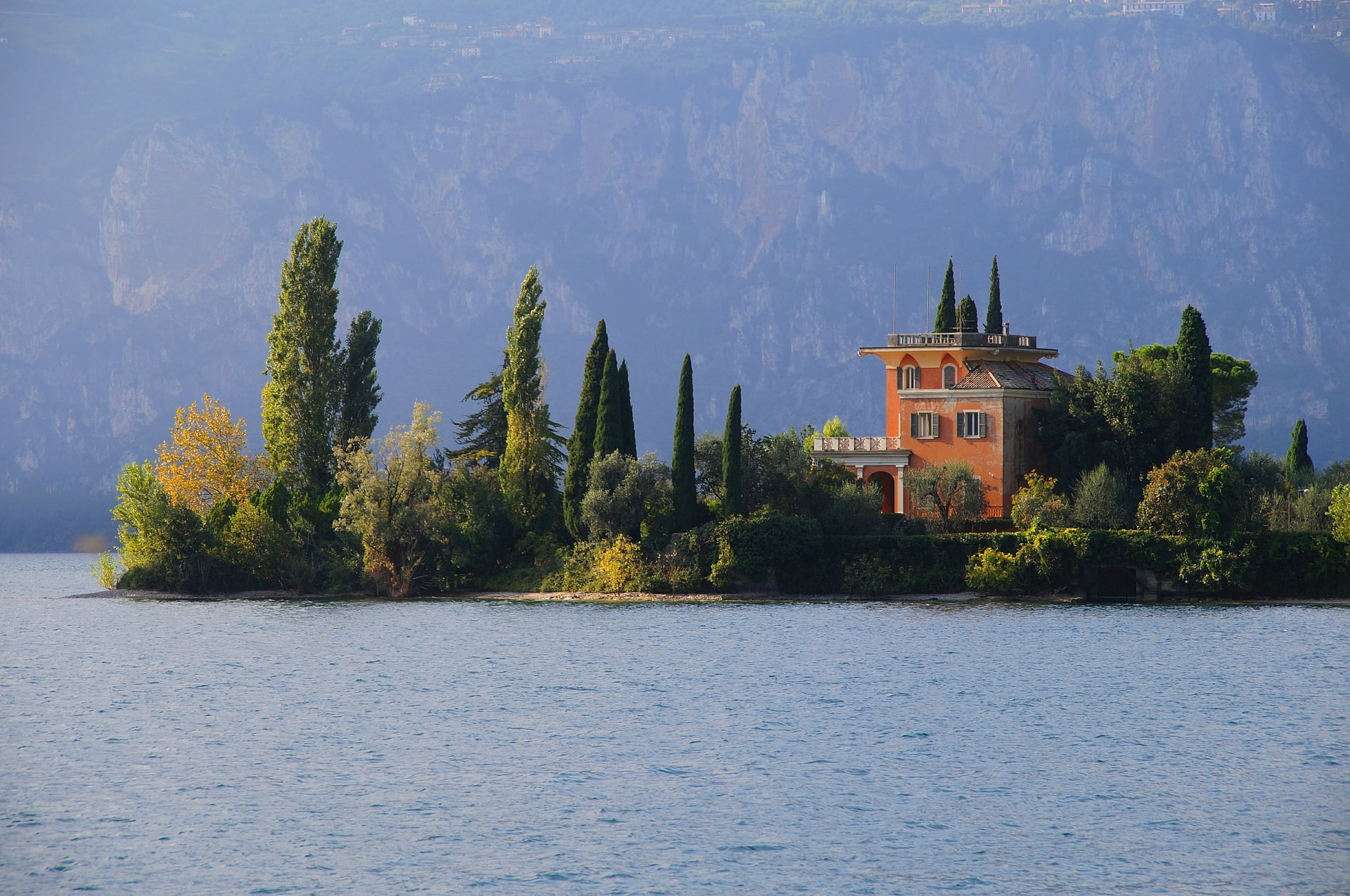